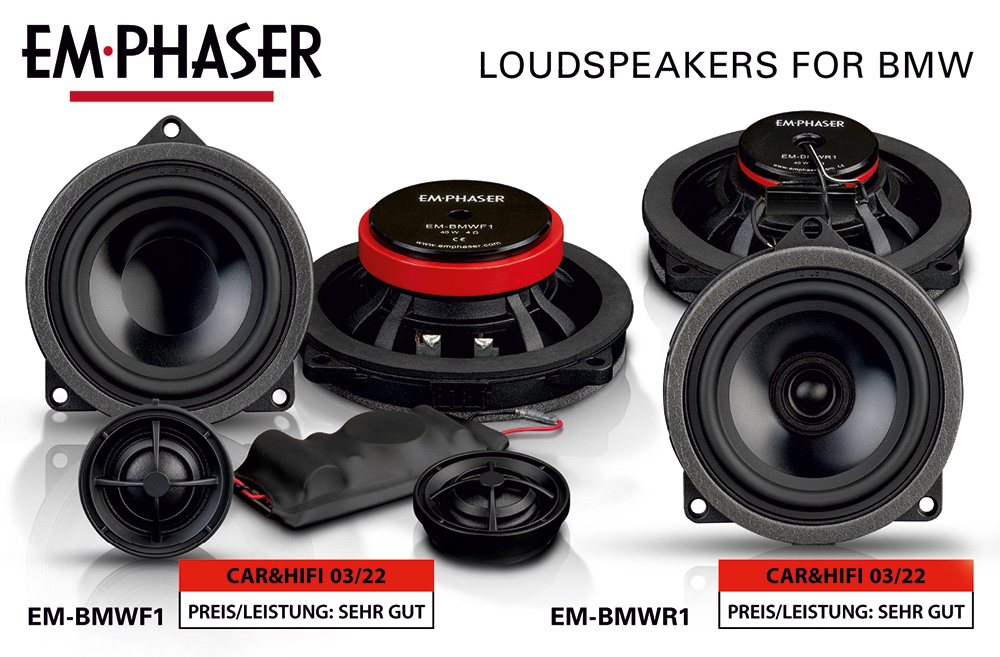 The EM-BMWF1 is the number one BMW-specific 2-way speaker, according to the Car & HiFi magazine Best List (03/2022) – verdict “high quality plug and play upgrade for BMW and Mini”

Many new BMWs and Minis have OEM speakers with a sound that not everyone finds convincing. Aftermarket systems suitable for a really easy sound upgrade are presented in the current German Car & HiFi magazine (03/2022) in a detailed test report: the component speaker system EM-BMWF1 and the coaxial system EM-BMWR1 from car audio specialist EMPHASER. Both new speakers fit perfectly in the BMW F and G series as well as in the F54 to F60 Mini models.
“The EM-BMWF1 front system is very elaborately made and is right off a joy to see”, say the testers about the 2-way component system. They are enthusiastic about its tailor-made design: “The woofer comes in an injection molded basket and BMW three-point mount – complete with rubber seal and BMW connector.”
The EM-BMWF1 impresses the tech journalists not only with its precise fit but also with its attention to detail. “The driver works with a ferrite ring for the magnetic field, and details like the finely planed and turned (in lieu of mere stamped) pole plates are a pleasure for the eye and engineer’s heart.” According to Car & HiFi the crossover is also “very elaborately made: in addition to the separation of tweeter and woofer it includes a switched high pass filter to relieve the little 10 cm speaker at low frequencies.”
The testers are also impressed by the quality of the EM-BMWR1: “As expected, the rear system is similarly made with injection molded basket and aluminum cone as well as a little but fine woven tweeter (instead of plastic dome) in the center.”
The component speaker EM-BMWF1 was then thoroughly convincing in the Car & HiFi test lab: “The front system really lets rip from 100 Hz, and when the high pass is switched in it matches the existing underseat woofers. The distortion figures of the little system turn out to be excellent. Levels can be achieved that are very respectable for the tiny cone surface of 83 square centimeters, and the woofer produces extremely little distortion.” The EM-BMWR1 also cuts a good figure in the measurement check: “The rear system also works well, the mid-high range being at the level of the woofer, as it should.”
With their sound performance both systems are then thoroughly convincing: “Both have a pleasing sound, crisp and detail-rich: drums and percussion are reproduced full of vigor, while vocals are not robbed of any of their character, but rather emphasized. In the case of the front system the tweeter does a superb job, delivering without sounding annoyingly harsh.”
As regards sound the EM-BMWR1 also scores with the tech journalists: “The little 13 millimeter tweeter of the rear system performs brilliantly, up among the best that you can find for the highs in a small coaxial system.”
“If you are looking for really well made speakers for your BMW or Mini you will find what you need at EMPHASER”, is the conclusion of the experienced testers. “The EM-BMWF1 and EM-BMWR1 systems are finished to a very high standard, providing a crisp sound with their elaborate crossovers and aluminum cones.” After the thorough test the respected tech journalists awarded both sound systems not only the coveted ‘price/performance: very good’ accolade. After ranking all the 2-way BMW systems tested by Car & HiFi the EM-BMWF1 has of now also taken the top position.

EMPHASER has been a name in the car audio sector for 30 years. The brand has become a well respected brand since middle of the 1990s for its enormously powerful subwoofers of the XTREME series, followed later by the series SPL, Linear-X, Neo-SPL and the state-of-the-art woofer E15NEO-COMP. The present range covers subwoofers, vehicle-specific Plug”N”Play component sets and classic lines of loudspeakers and amplifiers.
EMPHASER products are distributed exclusively through Europe’s largest car media specialist, the Swiss ACR AG. 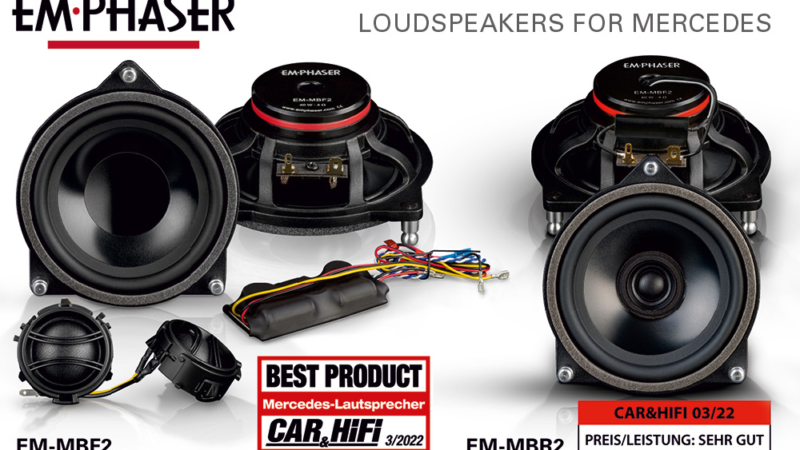 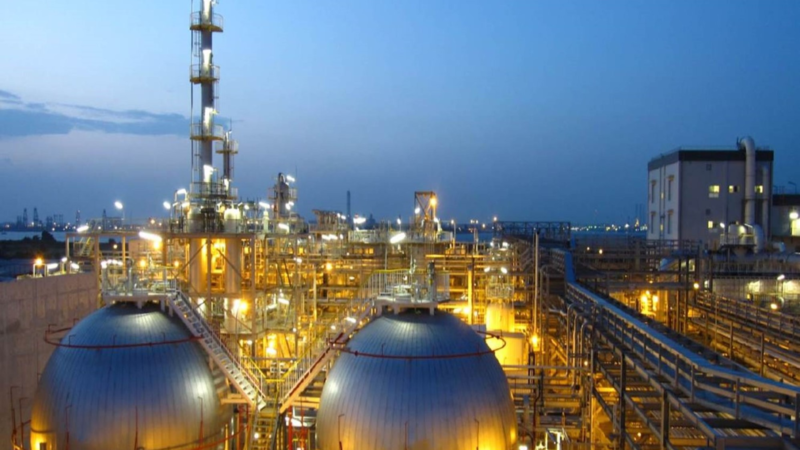 Düsseldorf, 12 May 2022 – Asahi Kasei has developed a system (the System1) to calculate 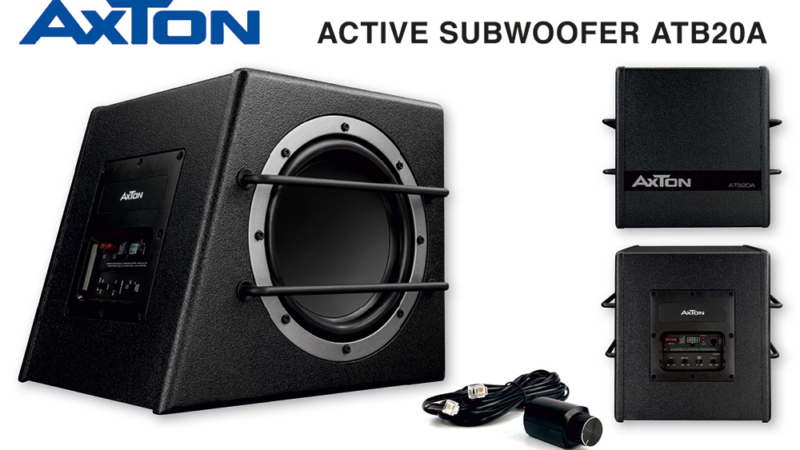 Ideal for retrofitting in cars and motorhomes: AXTON’s compact active bass box ATB20A is a 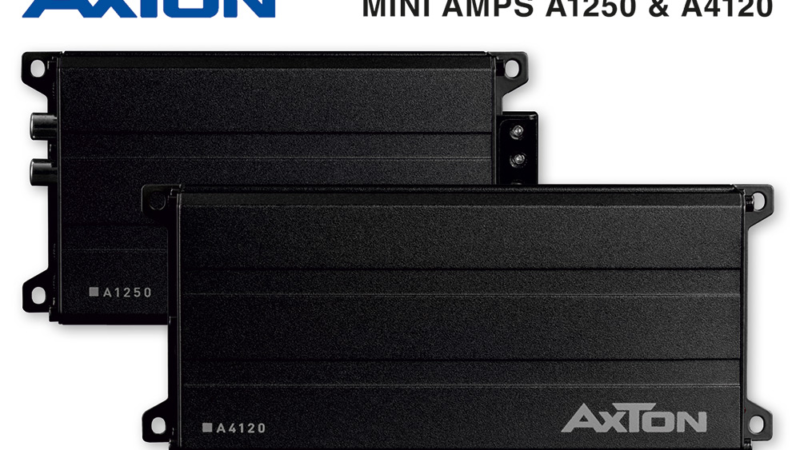 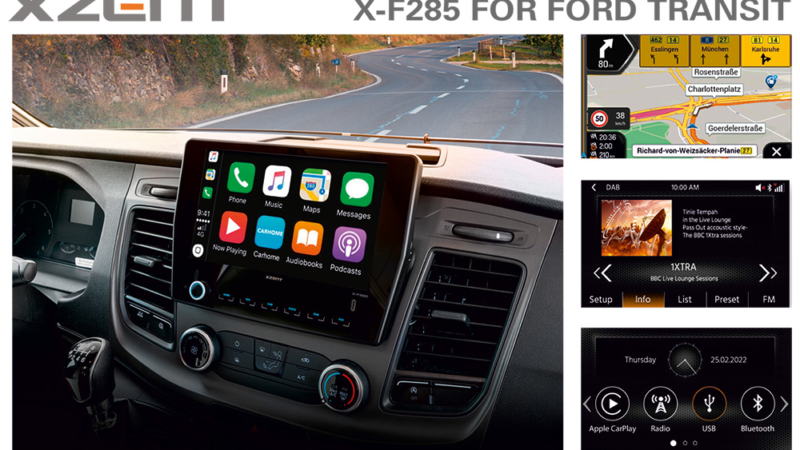 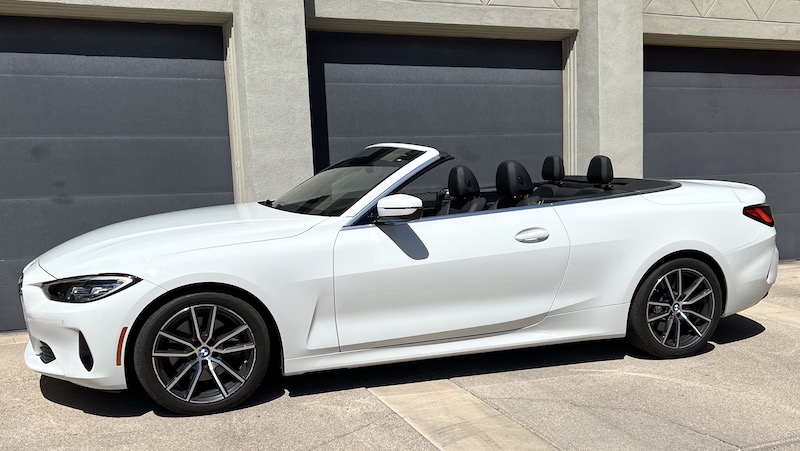